11 Gorgeous Texas Courthouses That Will Blow Your Mind

Any seasoned road tripping Texan will tell you that no matter where you are in the Lone Star State, there’s always something amazing to see. A great example of this is the dozens of beautiful late 19th-century courthouses that can be found in towns large and small all across Texas. These courthouses represent the peak of architecture at a time when communities around the state were just a few decades old. Almost always found within a town square, they also came to be a symbol of pride for the locals. Many of these spectacular structures still stand to this very day, serving as a stunning reminder of a different era.

If you’re a history enthusiast or a fan of classic architecture, you owe yourself a trip to check out these 11 amazing courthouses. 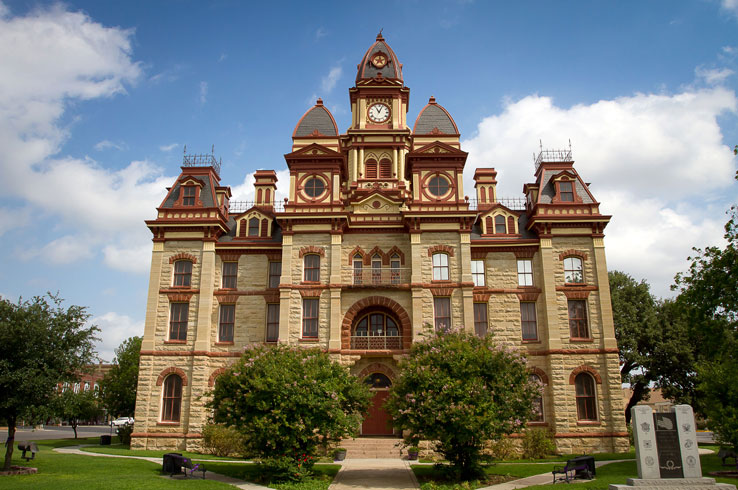 Many of Texas’ courthouses showcase the finest elements of European architecture while also taking advantage of local materials to create something a community could be proud of. There are few better examples of this than the 1894 Caldwell County Courthouse. Limestone walls accented by red sandstone are capped by mansard-style domes and an intricate clock tower that sports a bright orange Lone Star on each side. 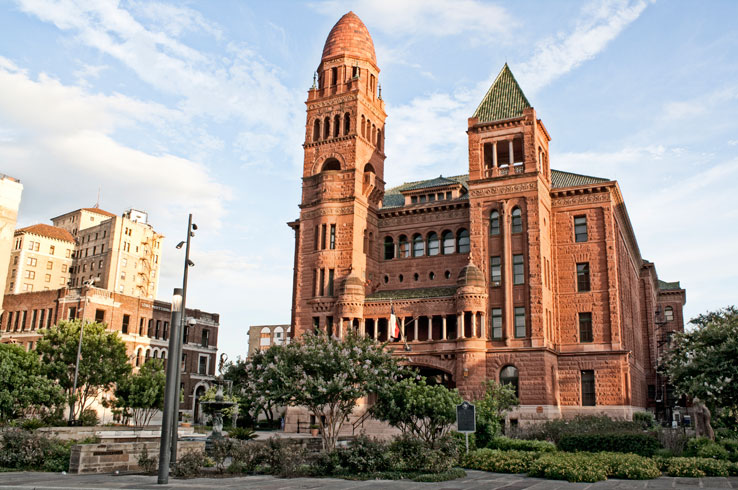 One of San Antonio’s claims to fame is its historic architecture (hello, Alamo), and if you walk through the downtown area you’ll see all sorts of spectacular examples of this. Yet if you’ve stuck to the River Walk area, you’ve probably never seen the Bexar County Courthouse. Built in 1896, the courthouse looks like a reddish-orange medieval European castle. Rounded arches, two towering pillars, and all the architectural flair of the Romanesque Revival style combines with red sandstone to create one of San Antonio’s most spectacular buildings. 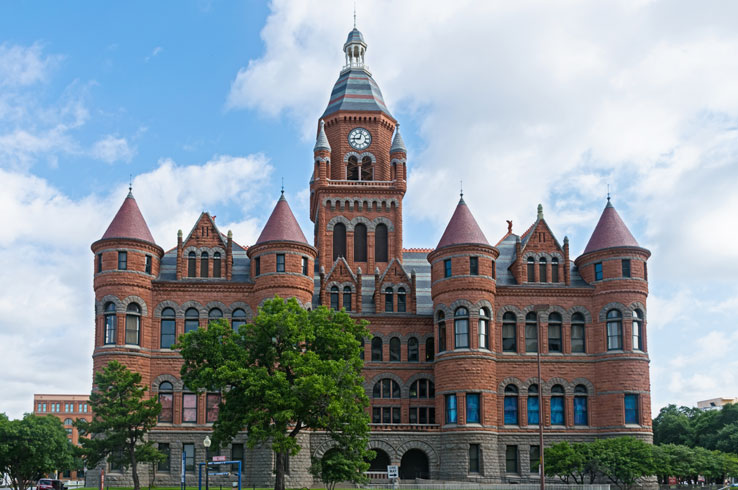 Speaking of stunning sandstone structures, the (former) Dallas County Courthouse is a true architectural gem in Big D’s downtown. The magnificent Romanesque Revival structure has rounded conical towers, arched windows, a massive clock tower, and four terra cotta wyverns perched on the roof. Step inside and you’ll see more than 100 colorful stained glass windows and a grand staircase that has been restored to how it appeared in 1892. The courthouse is the Old Red Museum today, and is a great place to go if you want to learn about North Texan history and culture. 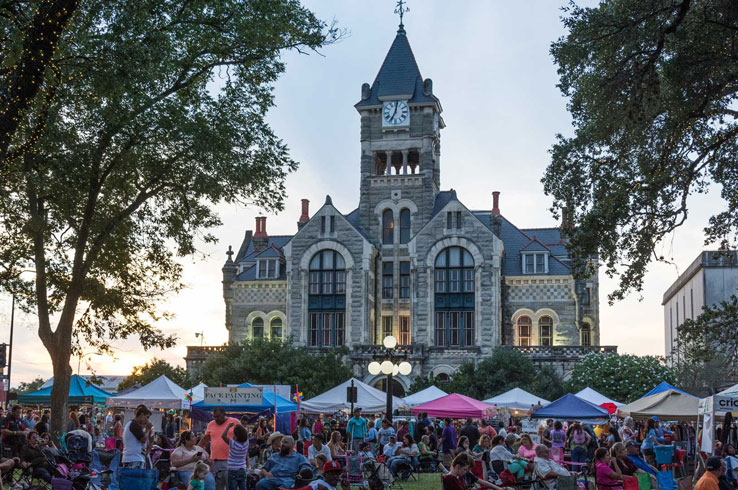 On first glance, you might think the Victoria County Courthouse is an ancient castle built by an eccentric European prince. However, this three-story civic building was constructed in 1892 by the same architect who crafted the Fayette County Courthouse (J.R. Gordon). Arched windows and doorways, triangular roofs, and other small details set this courthouse apart, while a five-story clock tower stands on the east side toward the town square. 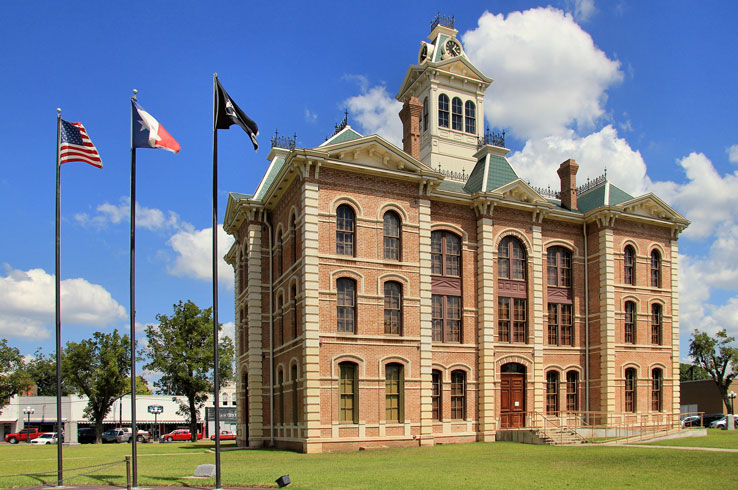 Nestled in the center of Wharton’s quaint town square stands a courthouse that looks as if it was plucked from a French city. A white clock tower will capture your attention, but look further and you’ll notice how the green mansard roofs and triangular towers complement the tan brick façade. Snap a few shots of the building, then check out the shops and restaurants in Wharton’s town square. If you time it right, you can even catch a comedy, drama, or musical at the historic Plaza Theatre. 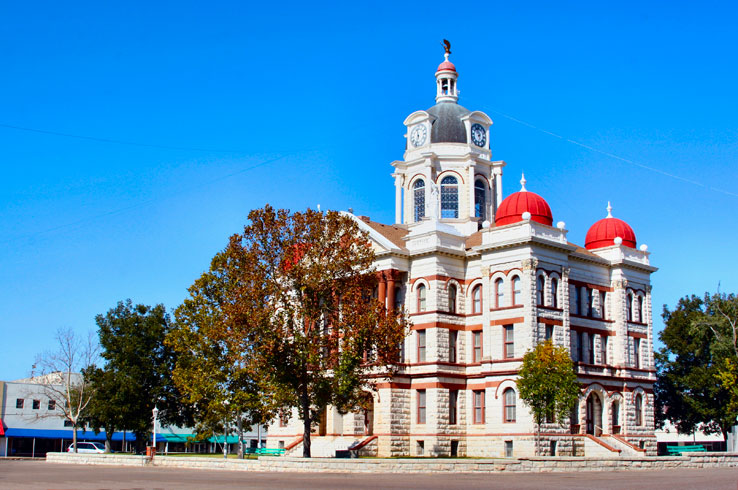 Drive about 40 miles west on Highway 84 from Waco and you’ll reach the small town of Gatesville, home to one of the prettiest courthouses in Texas. Coryell County’s courthouse has a rough limestone façade accented by red sandstone, four red-domed towers, and pearl-white Greco-Roman statues that stand in front of an ornate clock tower. Yet the most impressive characteristic just might be the bright reddish-orange columns that stand above the three-arched entryway. 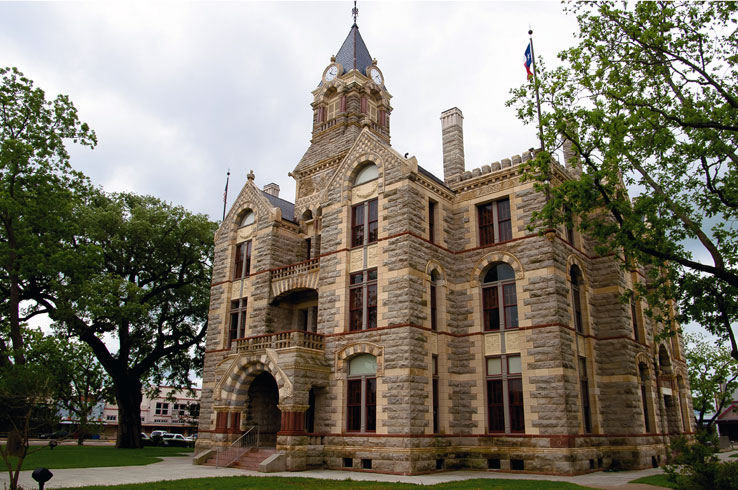 Although it was common practice to use multiple types of stone to create an appealing design, Fayette County’s courthouse takes it to another level. Blue sandstone walls are accented with red sandstone and limestone, a combination that creates a checkerboard pattern across the exterior. Look closely and you’ll see a ton of other intricate details, including a bald eagle carved on a five-by-14-foot slab of stone. The main entryway is framed by short sandstone columns, an aesthetic reflected on the clock tower. 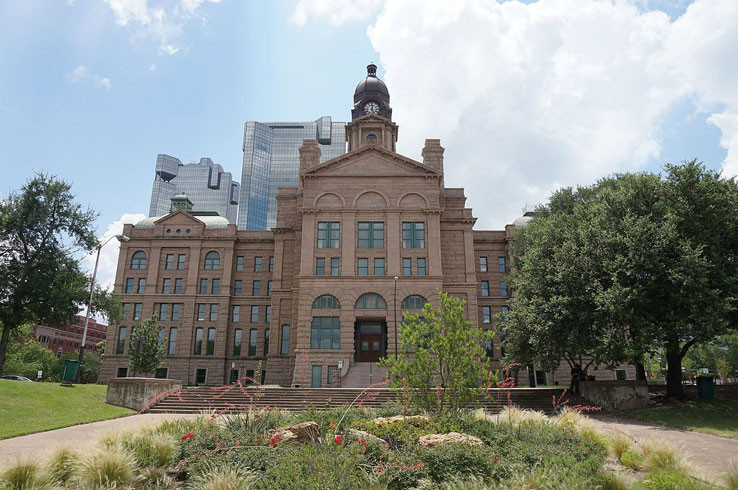 With its pink granite walls, Roman-style columns and pediments, and an attention-grabbing copper-domed clock tower make Tarrant County’s courthouse look as if it should be a state capitol. That’s no accident, as it was modeled after the Texas State Capitol building in Austin. Located just a short walk from the Trinity River in downtown Fort Worth, the courthouse is notable for being one of the first buildings in the Southwest built with a steel frame. Come check out the courthouse, then pay a visit to one of the many restaurants or bars in downtown Fort Worth. 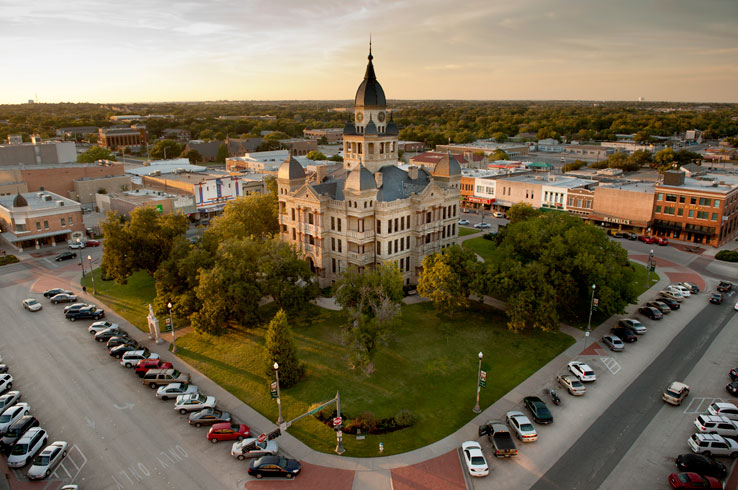 The state of Texas is full of beautiful courthouses (more than we can capture in this list), few are more eye-catching than the Denton County Courthouse. Four ogival roofs placed on the corners of the courthouse are replicated on the central clock tower, which features a dome inspired by the Florence Cathedral. Meanwhile, the rough limestone façade features Roman-style columns, triangular pediments, and arched entryways. Today, the structure is home to the Courthouse-on-the-Square Museum, a repository of local history that’s well worth a visit when you’re in Denton. 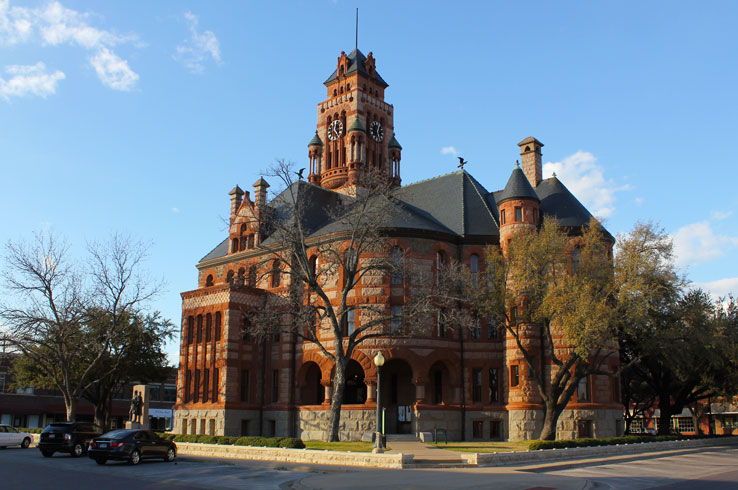 Ellis County’s impressive courthouse a complex and captivating structure that is one of the most photographed buildings in Texas. Set within Waxahachie’s charming downtown square, the nine-story-tall pink granite and red sandstone courthouse can be seen from some distance away. Get up close and your eyes can feast on all the details, such as the floral patterns carved into the stone at the top of the columns, or the pyramidal roofs. 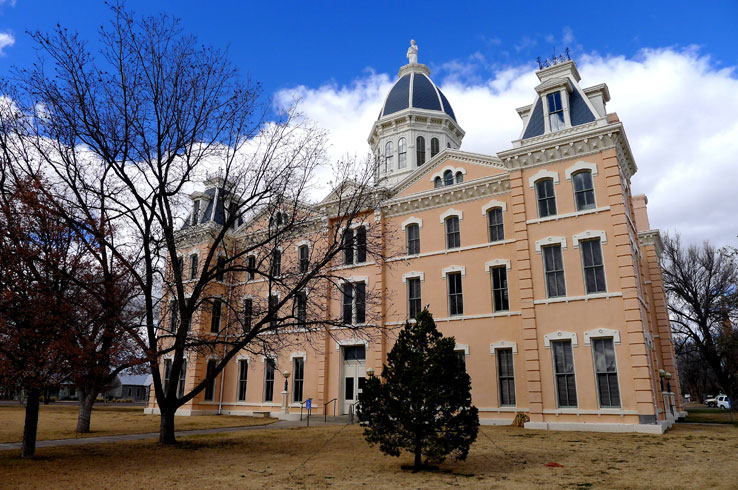 Off to West Texas we go for the last courthouse in our list: the Presidio County Courthouse in the small town of Marfa. Aesthetically, the 1889-built courthouse shares some traits with other Second Empire-style structures in Texas. Bright blue mansard roofs slant over pavilions that project from the four corners of the building. The massive white clock tower at the top is an attention-grabber, but what makes this building stand out is its salmon-painted stucco walls that cover the original brick.

Visit TourTexas.com to discover the many great destinations, attractions, and events in Texas.

About the Author: James Waterson is the head writer and content specialist for Tour Texas. When he isn’t writing, kayaking, and hiking, he’s planning his next epic adventure in the Lone Star State.