5 of the Best Ways to Experience Texas History in Gonzales

Few places in the Lone Star State are as steeped in history as the town of Gonzales. One of the oldest communities in Texas, some of the pivotal moments of the struggle for independence—from the first shot of the war for Texas Independence to the beginning of the Runaway Scrape leading to the defeat of Santa Ana’s army at San Jacinto—took place here. Gonzales is home to the Immortal 32 who were the only men to answer the call for reinforcements from the Alamo. This history is still alive in Gonzales today thanks to the abundance of homes, monuments, and museums that make up the first state-designated Texas History Museum District.
If you’re a history enthusiast or you want to discover a side of Texas you haven’t experienced before, go to Gonzales. Located an hour from Austin and San Antonio and two hours from Houston, it’s easy to plan a road trip here. Immerse yourself in the glorious past and bright future of Gonzales. 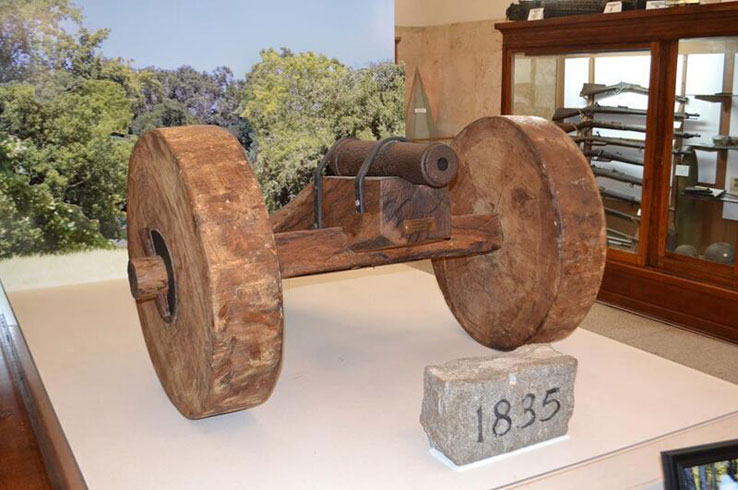 See the Famous “Come and Take It” Cannon

Even if you’re not a native Texan, you have probably heard of the “Come and Take It” cannon. On October 2, 1835, this cannon fired the first shot of the Texas Revolution, starting a conflict that reshaped borders and changed the course of history. It’s rare to see pieces of history like this in person, but that’s exactly what you can do at the Gonzales Memorial Museum.
Built to commemorate the Immortal 32 and other Texas heroes, the museum offers an in-depth look at Texas’ struggle for independence. Explore the museum and you’ll see rifles, munitions, and uniforms from the Texas Revolution era, as well as photographs that bring the town’s history to life. Don’t miss the two massive indoor murals painted by Buck Winn in 1938 that portray the culture and history of the Lone Star State. 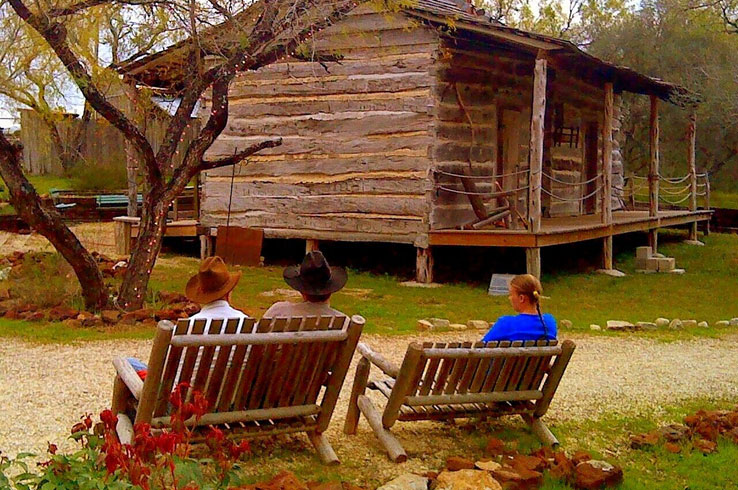 Step Back in Time

Explore a village of historic Texas structures. Admire the largest private gun collection on public display in the country, including rare and one-of-a-kind handguns. Visit a jail that once housed some of Texas’ most notorious outlaws. Experience what life was like for early Texans when you’re in Gonzales, starting at the Gonzales Pioneer Village Living History Center. There is plenty to see in the Pioneer Village. Step into 19th-century homes, churches, schools, blacksmith shops, saloons dating as far back as the 1840s to get a glimpse of life in the early days of Texas. Come on the first weekend in October to see a reenactment of the Battle of Gonzales, part of the annual Come & Take It Celebration.
View the largest private collection of original documents from the Texas Revolution era at the Robert Lee Brothers Jr., Memorial Library. This collection features more than 60 documents signed by Texas heroes Green DeWitt, Col. William Travis, Davy Crockett and Sam Houston. Then stop by the JB Wells House Museum, a 15-room mansion built in 1885, and the Eggleston House, a two-room dogtrot style home which is Gonzales’ oldest structure. For a birds-eye look at a typical early Texas community, check out the hand-crafted miniature town at the State Association of Texas Pioneers Museum.
Finally, wrap up your journey through Gonzales’ history at the Gonzales County Jail Museum. Tour the cell block and you’ll see the original cells, sheriff’s quarters, and rebuilt gallows. Artifacts from inmates and deputies are on display as well, combining to tell the story of all the people who passed through the old jail. 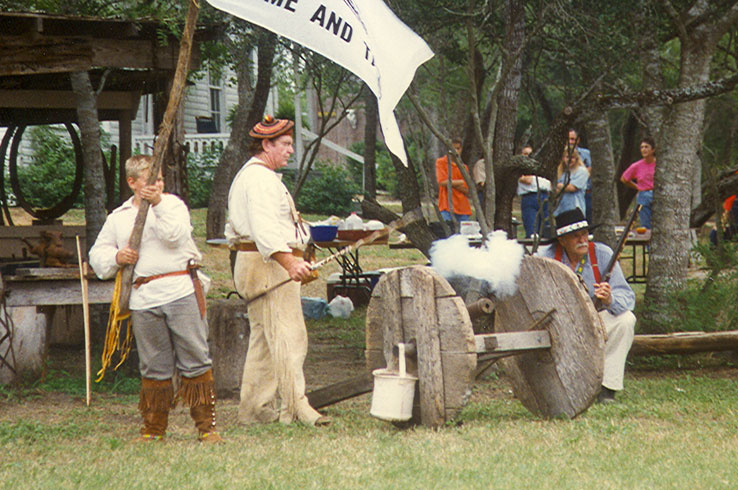 Watch the Battle That Started a Revolution

A single shot from a tiny cannon sparked the Battle of Gonzales, the Texas Revolution and the creation of a new nation. Right before your eyes, the battle unfolds during Gonzales’ annual Come & Take It Celebration held on the first full weekend in October. Flinch from the musket fire during the reenactment at the Pioneer Village on Saturday afternoon. Take in the parade, the golf tournament at Independence Park, the Go Texan Quilt Show, live music, the world-renowned Chicken Flying Contest and all the other festivities throughout town. 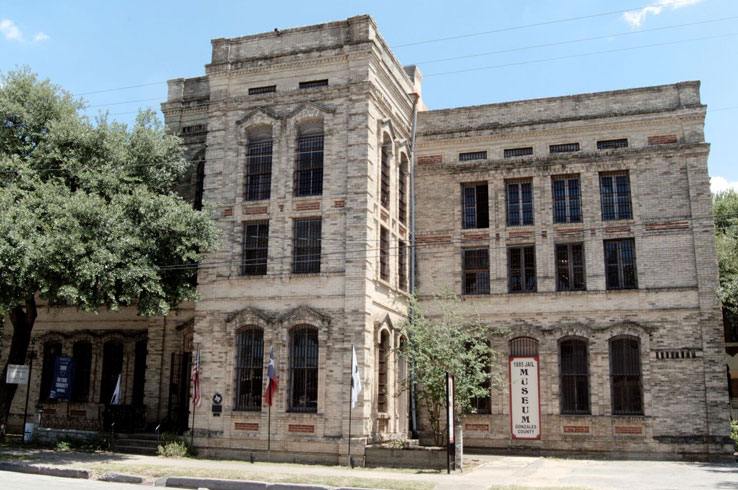 One of the most historic places in Texas, it is no surprise that Gonzales has such a high concentration of beautifully preserved 19th-century structures. Gonzales is a living, breathing showcase of another period. To see all of this for yourself, follow the Historic Driving and Walking Tours. Start at the 1894 Gonzales County Courthouse, built by noted architect J. Gordan Riley. Cruise the neighborhoods to see such impressive homes as the Houston House and the T.H. Spooner House, two of over 80 historic homes in town. Each locale tells a story of prestigious bankers, intrepid early settlers, prosperous farmers and ranchers, legends of early cattle drives and giants of industry and banking. The best way to see this time capsule of Texas history is to embark on a driving or walking tour. You can even request a volunteer guide to go along with you! 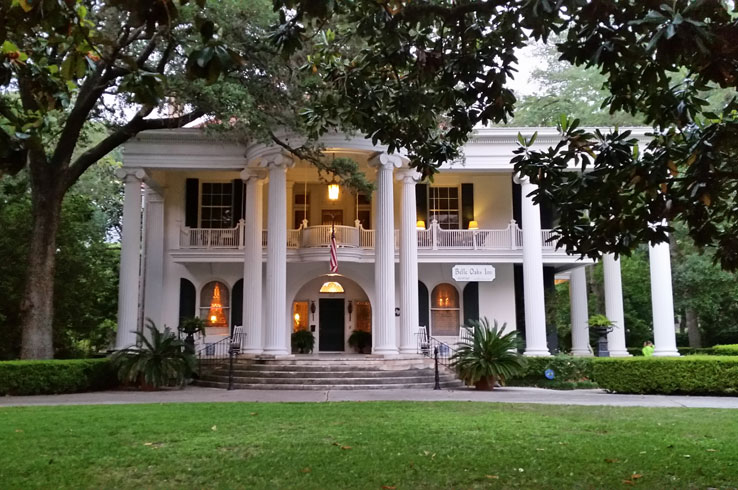 Spend the Night in a Beautiful Historic Home

Relax on the porch of a spectacular mansion, your home away from home during your stay in Gonzales. You can do just that at one of Gonzales’ bed and breakfasts. Stay at the St. James Inn, a stately home built in 1914 for the son of General Sam Houston. Enjoy the vintage furnishings and cozy rooms at the Belle Oaks Inn, which offers a variety of accommodations ideal for romantic getaways and groups of up to 16. Laurel Ridge Inn was built by the sheriff who held off the mob in the Gregorio Ortez event. Laurel Ridge Inn offers a unique look at the history of Texas lawmen.
Want to stay within walking distance of just about everything in town? Gonzales boasts two recently renovated boutique-style hotels on and near the downtown square and a wide variety of nationally recognized hotels in the area. No matter where you hang your hat, you’ll have a stay like no other.

As one of Texas’ most historic places, Gonzales is a must-visit for anyone interested in experiencing the remarkable history of the Lone Star State. Discover everything Gonzales has to offer and start planning your trip here.